We tried to accept the reality that we may, in fact, spend years in prison. But we believed very strongly that we would not die in jail. We would return. But we stayed there for 27 years.

Mandela: An Audio History is the award-winning radio series documenting the struggle against apartheid through intimate first-person accounts of Nelson Mandela himself, as well as those who fought with him, and against him.

Recognized as one of the most comprehensive oral histories of apartheid ever broadcast, the series weaves together more than 50 first-person interviews with an unprecedented collection of rare archival recordings, some of which had never been heard before. Featuring: 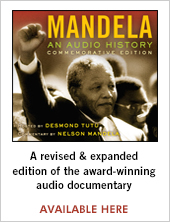